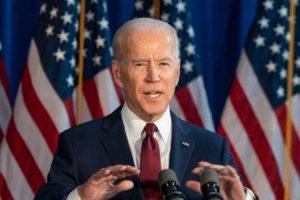 “Our commitments on issues of human sexuality and the family, as with our commitments in every other area — such as abolishing the death penalty or seeking a health care system and economy that truly serves the human person — are guided by Christ’s great commandment to love and to stand in solidarity with our brothers and sisters, especially the most vulnerable,” Archbishop Jose Gomez of Los Angeles, president of the U.S. Conference of Catholic Bishops, said in the statement.

He said he is praying that God may grant the incoming president wisdom and courage in pursuing unity, healing, liberty, and equality.

Archbishop Gomez stressed that the role of the Catholic bishops is not to endorse parties or candidates, but to offer principles that can guide consciences.

“Catholic bishops are not partisan players in our nation’s politics,” he said. “We are pastors responsible for the souls of millions of Americans and we are advocates for the needs of all our neighbors.”

The bishops’ conference, he said, has worked for years to address a wide variety of issues, including abortion, euthanasia, the death penalty, peace and economic development, racism, immigration, poverty, the environment, and criminal justice reform.

“On these and other issues, our duty to love and our moral principles lead us to prudential judgments and positions that do not align neatly with the political categories of left or right or the platforms of our two major political parties,” he said.

“On some issues we find ourselves more on the side of Democrats, while on others we find ourselves standing with Republicans. Our priorities are never partisan. We are Catholics first, seeking only to follow Jesus Christ faithfully and to advance his vision for human fraternity and community.”

Archbishop Gomez noted that the bishops’ conference works with every president and Congress, but added that working with Biden will be unique, since “he is our first president in 60 years to profess the Catholic faith.”

The archbishop said he finds hope and inspiration in Biden’s personal witness of relying on faith in difficult times and commitment to the poor.

At the same time, he said, “our new President has pledged to pursue certain policies that would advance moral evils and threaten human life and dignity, most seriously in the areas of abortion, contraception, marriage, and gender. Of deep concern is the liberty of the Church and the freedom of believers to live according to their consciences.”

Stressing that the bishops must preach the truth of the Gospel even when doing so is unpopular, Archbishop Gomez said that the issue of abortion merits special attention as a grave evil in society.

“For the nation’s bishops, the continued injustice of abortion remains the ‘preeminent priority’,” he said, adding that “preeminent does not mean ‘only’,” and there are a wide variety of challenges and threats to human dignity facing the country today.”

“Abortion is a direct attack on life that also wounds the woman and undermines the family,” he said. “It is not only a private matter, it raises troubling and fundamental questions of fraternity, solidarity, and inclusion in the human community. It is also a matter of social justice. We cannot ignore the reality that abortion rates are much higher among the poor and minorities, and that the procedure is regularly used to eliminate children who would be born with disabilities.”

In the Diocese of Harrisburg Bishop Ronald Gainer also released a statement, saying: “I join with my fellow Catholic bishops today in praying that God will grant our new President and those in his administration the grace to lead our great nation in truth and justice. President Biden is the first Chief Executive of the U.S. to profess the Catholic faith in 60 years. I welcome all opportunities for collaboration and support where the new administration enacts policies that are truly in accord with our Catholic moral teaching. These areas include opposition to the death penalty; and an economy and a health care system that truly serve the authentic needs of the human person.

“At the same time, as Archbishop Jose Gomez, the President of the United States Conference of Catholic Bishops, has indicated, I will unrelentingly speak the truths of the Gospel and the preeminent teaching of our Church regarding the sanctity of human life from conception to natural death, the protection of religious freedom and the true nature of human sexuality and marriage. These principles are consistent with a well-formed Catholic conscience,” Bishop Gainer said.

The U.S. bishops will engage with the president in the hopes of beginning “a dialogue to address the complicated cultural and economic factors that are driving abortion and discouraging families,” Archbishop Gomez said.

He voiced hope that Biden will be willing to work with the Church and avoid expanding abortion and contraception.

“My hope, too, is that we can work together to finally put in place a coherent family policy in this country, one that acknowledges the crucial importance of strong marriages and parenting to the well-being of children and the stability of communities,” the archbishop said. “If the President, with full respect for the Church’s religious freedom, were to engage in this conversation, it would go a long way toward restoring the civil balance and healing our country’s needs.”

In his inauguration address, Biden called for national unity.

He said that “to restore the soul and secure the future of America requires so much more than words,” and added that “it requires the most elusive of all things in a democracy, unity. Unity.”

Biden also quoted St. Augustine to underline the need for unity in truth.

“Many centuries ago, St. Augustine, a saint in my Church, wrote that a people was a multitude defined by the common objects of their love,” he said. These “common objects” that define Americans, said Biden, are “opportunity, security, liberty, dignity, respect, honor and, yes, the truth.”

He added that “each of us has a duty and a responsibility as citizens, as Americans, and especially as leaders, leaders who have pledged to honor our Constitution and protect our nation, to defend the truth and defeat the lies.”

Elsewhere in his address, Biden stressed the need to “set aside politics and finally face this pandemic as one nation.” He cited Psalm 30, reminding those that “weep, ye may endure for a night, but joy cometh in the morning.”

“We will get through this together. Together,” he said. Biden paused for a moment of silent prayer for those who had died in the pandemic.

Coming together, said Biden, will help to heal “a broken land.”

Archbishop Gomez praised Biden’s call for healing and unity in America, saying that such healing is “urgently needed as we confront the trauma in our country caused by the coronavirus pandemic and the social isolation that has only worsened the intense and long-simmering divisions among our fellow citizens.”

True healing can only come from God, the archbishop said, and requires forgiveness and dialogue.

“Christian love calls us to love our enemies and bless those who oppose us, and to treat others with the same compassion that we want for ourselves,” he added.

The president of the bishops’ conference concluded by entrusting the country’s transition to the Blessed Virgin Mary.

“May she guide us in the ways of peace and obtain for us wisdom and the grace of a true patriotism and love of country,” he said.