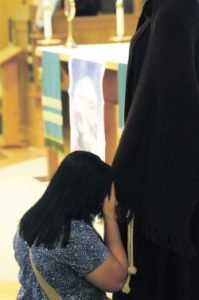 A woman venerates the last vestment worn by Padre Pio before he died. Two of the saints’ relics were at St. Peter Church in Elizabethtown on Sept. 23.

“Pray, hope and don’t worry. Worry is useless. Our Merciful Lord will listen to your prayer.”
These words spoken by St. Pio of Pietrelcina, commonly known as Padre Pio, were certainly on the minds of the countless members of the faithful who traveled to St. Peter Church in Elizabethtown on Sept. 23. On the feast day of St. Padre Pio, the parish was blessed to host two relics of this gentle friar who bore the wounds of Christ.

Catholics throughout the greater Elizabethtown area flocked to St. Peter’s throughout the day, bringing their prayers and petitions and asking for Padre Pio’s intersections. Two relics – a glove and robe – were on display. Following veneration of the relics and Adoration of the Blessed Sacrament, a Mass with Prayers for Healing was held.

“I’ve had a devotion to him for many, many years,” said Ellen Bagatta. “I remember him before he was a saint.”

Ellen’s grandson, Kevin Bagatta, added that he had “written a paper about him (Padre Pio) in high school and started a devotion to him. I couldn’t pass up this opportunity.”

“We had planned a family trip to the Padre Pio shrine, but were not able to go yet,” said Tiffany Yannelli. “A bunch of our family came today.”

“I’ve had some stomach issues and I’ve prayed (to Padre Pio) over the years,” said Kurt Yannelli. “There was a quietness and connection with your faith,” he added about spending time with the relics.

Christina Murphy, a member of Mary, Mother of the Church Parish in Mount Joy, visited the National Centre for Padre Pio in Barto, Pa., 10 years ago during an illness.

“I asked to be his spiritual child,” Murphy said. When venerating his relics at St. Peter’s, Murphy asked Padre Pio to intercede for her healing again.

“I put my hand on his glove and touched his robe,” she said. “I was excited and happy to do that. He is one of my favorite saints. I felt a gush and like I would be healed.” 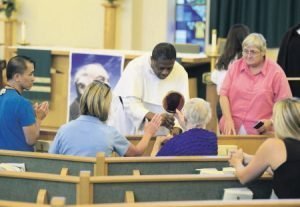 Fortunato Grottola was 12 years old when he first met Padre Pio. Now a friar and guardian of the Convent of Pietrelcina in Italy, Father Grottola spoke several times to those gathered for veneration about the life and teachings of Padre Pio.

Father Grottola recounted a time when Padre Pio asked his brother friars why they always hid their faces during the Mass and would not look at the altar. It was as if they had something to hide.

“Why do we hide?” Father Grottola asked. “Maybe we are carrying heavy burdens. When we come before the Lord, we are healed.”

Father Grottola added that there is no sin the Lord cannot forgive.

“When people went to Padre Pio, he always embraced the sinner. He used to cry with them,” Father Grottola said.

He added that we need to believe the Lord is present and alive.

“We cannot think of the Lord as someone far away from us,” Father Grottola said. “Where is God? I would like to hear that he is in each one of us. If God is always with us, it means only one thing – he loves us. That’s what we should do. Love him.”

Father Bernard-Mary Ayo Oniwe, O.P., pastor of St. Peter’s, spoke during his homily of his personal devotion to Padre Pio.

Father Oniwe said throughout his life he has experienced several encounters with the saint.

“In the early days of my spiritual revival, I went to a bookstore looking for books to help clarify the Church’s teaching on Mary,” Father Oniwe said. “As I walked in, I saw a picture on a bookstand of Padre Pio.”

The image was on the cover of one of the many books about Padre Pio.

“Each time I looked around, he was staring back at me. So, I took a closer look (at the book),” said Father Oniwe. “That was the moment that Padre Pio invited me to be his spiritual son. I was drawn to him. I read about him and the saints. This was how the seed was planted (in me) to be in religious life.”

Father Oniwe added that at first he felt the call to be a monk.

“But I’m too much of a social butterfly,” he said. He entered the Dominicans and continued to read books about Padre Pio, increasing his devotion.

“I was ordained on the feast day of Padre Pio,” Father Oniwe said, although Padre Pio was not yet a saint. “For this man, I’m proud to be a spiritual son. I pray for all of us that have shown so much devotion tonight, that he draws us to true love, to Jesus.” 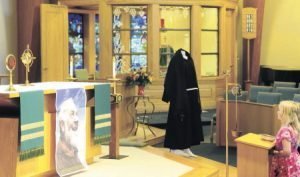 A reliquary with Padre Pio’s glove and the last vestment he wore were available for venera- tion at St. Peter Church in Eliza- bethtown, along with Adoration of the Blessed Sacrament and Mass with Prayers for Healing on the saint’s feast day.

Padre Pio was born in Pietrelcina, Italy, on May 25, 1887, and entered the novitiate of the Capuchin Order of the Friars Minor at the age of 15. He was ordained to the priesthood in 1910, and was known for his piety and spirituality.

The marks of the stigmata – the wounds of Christ – first appeared on Padre Pio’s hands, feet and side on Sept. 20, 1918, while he prayed in front of a crucifix. He bore those painful wounds until his death 50 years later, on Sept. 23, 1968.

Though he lived a life of pain and poor health, Padre Pio was a man of joy and laughter. Thousands of pilgrims visited him over the course of the years, drawn by the spiritual riches that came from his ministry. He would hear Confessions up to 50 times a day.

Padre Pio was canonized on June 16, 2002, by St. John Paul II. More information on St. Padre Pio can be found at www.padrepio.org.