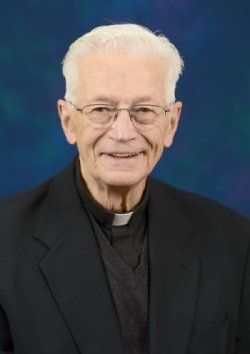 Father (Colonel) Robert F. Berger, KHS, died at his family home on December 14, 2020. He was a priest of the Diocese of Harrisburg for 58 years.

He was born August 30, 1935, in Locust Gap, the son of the late George Francis and Josephine (Heiser) Berger.

Throughout his priesthood, Father Berger’s various parish assignments in the Diocese were as assistant pastor at Good Shepherd Parish, Camp Hill; Assumption of the Blessed Virgin Mary Parish, Lebanon; St Francis Xavier Parish, Gettysburg; and pastor at Mary, Gate of Heaven Parish, Myerstown. He entered the Pennsylvania National Guard and then served on active duty as a chaplain from 1967-1993. In January 1993, he was appointed pastor of Mary, Gate of Heaven Parish until his retirement on January 31, 2017.

Father Berger was an avid reader who did extensive research for the more than 600 thought-provoking homilies he printed and filed for future use. He founded the WW II Chaplains Memorial Foundation to bring attention to the important roles of chaplains and to preserve their stories, artifacts and photos, including being involved in the effort to have Chaplain Ignatius Maternowski promoted to sainthood for his selfless actions on D-Day, June 6, 1944.

While in the Chaplain Corps, Father Berger advanced from the rank of Lieutenant to that of Colonel. He served at Fort Bragg and Vietnam with 173rd Airborne Brigade, in Korea with the 2nd Infantry Division, and in Germany with the 3rd Infantry Division; at Fort Benning and Fort Bliss and was Post Chaplain at Fort Leonard Wood and Fort Stewart. His military awards include: Bronze star (2ndOLC), Meritorious Service Medal (6thOLC), Air Medal, Army Commendation Medal (2ndOLC), Vietnam Service Medal, Vietnam Campaign Medal and Unit Citation of the Vietnam Cross of Gallantry.

Father Berger is a life member of the American Legion and the Veterans of Foreign Wars. He was a member of the Knights of Columbus, 4th Degree and was selected as Knight of the Year, Mary Gate of Heaven and State Exemplification Honoree in 2016. He is a graduate of Command and General Staff College at Ft. Leavenworth.

Father Berger earned three master’s degrees, one in Psychology and two in Theology, and wrote training manuals for the first class of permanent deacons in the Diocese and another for marital counseling. He was given the ecclesiastical honor of Knight of the Equestrian Order of the Holy Sepulchre (KHS) in Jerusalem by Cardinal Edwin O’Brien.

Father Berger was preceded in death by his parents, George Francis and Josephine, his sister, Sister Patricia Ann, and nephew, Robert Christian. He is survived by his sister, Kathleen Ferdock, of Bloomsburg and brother Francis of Elysburg, and many nieces and nephews

Mass of Transferal will be celebrated at Our Lady of Mount Carmel Church in Mount Carmel on December 29 at 7 p.m. by Father Jonathan Sawicki. Father Berger’s body will be present at the church from 5-6:45 p.m. for private prayer. A Rosary will be prayed at 6 p.m., before the Mass at 7 p.m. Private prayer will follow until 9 p.m.

The Mass of Christian Burial will be a Latin High Mass, by invitation only, at the Carmel of Jesus, Mary and Joseph in Elysburg on December 30 at 11 a.m. Bishop Ronald Gainer will be the celebrant. Burial will be in All Saints Cemetery in Elysburg.

Live streaming of both services will be available online at