The parish of Saint Elizabeth Ann Seton was established on April 21, 1977, with Father Daniel Menniti as the founding pastor. The first Mass for the new parish was celebrated in nearby Saint Peter’s 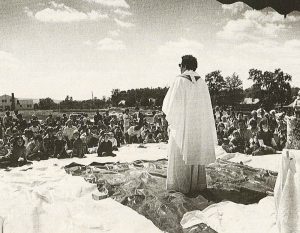 Lutheran church on May 21, 1977, where Sunday Mass was offered until the dedication of the parish’s own church.  The first anniversary of that Mass was commemorated with Mass and a picnic at the site of the new church atop Mount Allen.  The ceremonial groundbreaking took place at that time for the construction of a modified colonial design church, which would reflect both the colonial period in which Saint Elizabeth Ann Seton had lived and modern church architecture.  The new church was dedicated on July 17, 1979 by Bishop Joseph Daley. 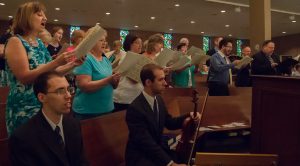 In 1982, Father Richard Waldron was named pastor. He enjoyed a pastorate of almost 30 years, which saw phenomenal development in surrounding neighborhoods and rapid growth in the parish.  Two expansions of the parish facilities added classrooms and meeting rooms, expanded seating in the church, and added to the parish offices.

Monsignor William King, then Vicar General of the diocese, was named pastor in 2011 and became full-time pastor in 2012 after serving nearly 28 years in diocesan administration. With rapid growth in parish ministries, another expansion and renovation project was necessary.  After many months of planning, ground was broken in May 2015 for a new Narthex, recreational hall, youth room, café area, and parish offices.  In January 2016 the new expansion was complete and renovations began to the church, which added seating, enlarged the sanctuary, and added new space for childcare and nursery.  A new Divine Mercy Chapel was added for daily Mass and smaller liturgies. The newly renovated church was solemnly dedicated on May 22, 2016 by Bishop Ronald Gainer.

From the faith, courage, and imagination of the 230 founding families, Saint Elizabeth Ann Seton parish remains a beacon of faith on the hill, with 1500 households calling the church atop Mount Allen their spiritual home.