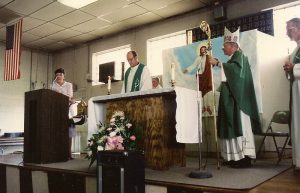 In the spring of 1988, Bishop William Keeler decided to form a new parish to accommodate the rapid growth of Silver Spring Township in Cumberland County.  He issued the formal decree creating the Catholic Parish of Silver Spring on July 14, 1988.  Rev. James R. O’Brien was named the pastor and he immediately set out to create a parish community.  The first Mass was celebrated in the Silver Spring Fire Company on July 31, when Bishop Keeler formally installed Father O’Brien as the pastor.

With the announcement that Mother Katharine Drexel was to be beatified, a name for the parish became obvious.  Mother Katharine had traveled through the township many times on her way to the Carlisle Indian Industrial School where she and her sisters ministered to the Catholic Native American students of the school as well as African American children in Carlisle.  From her train window she could even see the hillside where a church named for her would be built.  Her beatification took place at St. Peter’s on November 20, 1988.  On the very next day the Vatican approved the naming of the parish in Silver Spring “Blessed Katharine Drexel Parish.”  It was the first church in the world named in her honor. 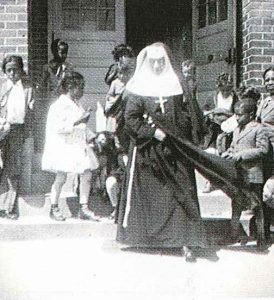 Katharine Drexel’s two guiding themes were devotion to the Eucharist and consideration for the Native American and African American peoples.  These themes became the focus of the new parish as well.  Ground was broken on the church building on June 17, 1990.  The first Mass was offered in the new church building on May 4, 1991, fittingly the Mass of First Eucharist for the children of the parish.  Formal dedication by Bishop Dattilo was held on September 8, 1991.  With the canonization of Saint Katharine Drexel on October 1, 2000, the parish name was changed to reflect her sainthood.

2013 marked a year-long celebration of the 25th anniversary of the founding of the parish.  It included an anniversary Mass and dinner, a display of the parish history and artifacts, and a special gift to the Sisters of the Blessed Sacrament for the support of their orphanage in Haiti.