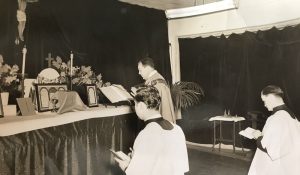 On March 1, 1948, Bishop George L. Leech established the parish of Saint Margaret Mary Alacoque which drew parishioners from the overflowing church of Saint Francis of Assisi, east of Harrisburg (including Penbrook, and Susquehanna and Lower Paxton Townships).  In the decree of erection the Bishop stated that this action was taken “because of the excessive number of souls in the parish of Saint Francis of Assisi, and the great difficulty which many of the parishioners have in attending Holy Mass and devotions in the parish church notwithstanding the exemplary pastoral zeal and solicitude now exercised.

The first Mass in the new parish was offered on March 7, 1948 (Laetare Sunday) in a local automobile showroom which also provided a temporary office for the new parish.  Weekday Mases were celebrated in a private home.    Eager parishioners worked hard to build a new parish and its support systems for the Catholics of this area and on August 8, 1948, ground was broken for a church, school and cafeteria-social hall.  It was during this time that the pastor lived at Saint Peter’s rectory in Steelton and then in an apartment. 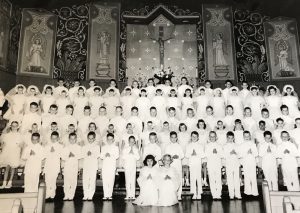 On October 17, 1949, the Feast of Saint Margaret Mary, the new church on Herr Street was dedicated and the first Mass was celebrated.  On August 29, 1949, four School Sisters of Notre Dame arrived to open the new school.  They took up residence in a building which eventually became the rectory.

With the growth of the suburban area, the parish found it necessary to add additional Sunday Masses and supply additional school facilities.  In 1951 and 1952 temporary classrooms were put into service and in 1954 four additional classrooms, a library, teachers’ room and kindergarten were added to the original building.  In 1955 a new convent, with a classroom in the basement was erected. 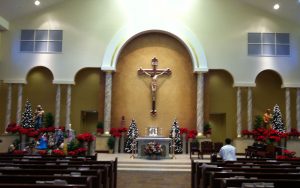 Interior of the current church

In 2009, construction was started on a new church in Susquehanna Township. The church on Paxton Church Road, built in the Romanesque style of architecture, was dedicated by Bishop Kevin Rhoades, by then Bishop of Fort Wayne-South Bend, on April 10, 2010. The following year, a rectory was built on the church grounds. Plans call for a Parish Center and a school to be located on the grounds in the future.

At the present time the parish office and the school remain on the Herr Street property in Penbrook.