Missionaries from Conewago and Saint Mary’s, Lancaster, visited Harrisburg in the 1700s and early 1800s. German Jesuits brought Catholicism to Central Pennsylvania during the pre-Revolutionary period. Historical records indicate that in 1806 there was a small Catholic mission in Harrisburg.  Later, in 1813, property in the Allison Hill section of the city was purchased.  There is evidence that a chapel was erected as well as a cemetery.  This property was later sold, only to be purchased again in 1871 for the Bishop’s Residence. 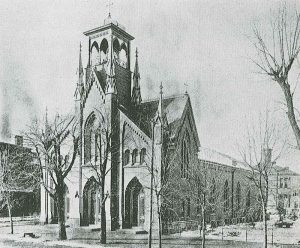 n 1822 the land on Allison Hill was sold, and in 1824, the present site of Saint Patrick Cathedral was purchased, with the cornerstone being laid in 1826. The church was blessed on October 21, 1827 in honor of Saint Patrick, the patron saint of Ireland. The impetus for this activity and the relocation of the parish near the river came from the Irish immigrants who had been imported in great numbers for the construction of the Pennsylvania Canal.

After the formal establishment of the Diocese of Harrisburg in 1868, the original Saint Patrick Church was designated as a “pro-cathedral” – a church that would temporarily house the cathedra, or the Bishop’s chair – until a permanent cathedral could be erected.

As part of a diocesan synod in 1902, Bishop John W. Shanahan proposed the idea of building a cathedral.  Bodies that had been buried in the parish cemetery had to be relocated to the new Mount Calvary Cemetery. Construction began in 1904 and was completed on March 1, 1907. The Cathedral was built for $250,000.  The church was listed on the National Register of Historic Places as a contributing property in the Harrisburg Historic District in 1976.

The whole diocese cooperated in raising funds to build the present Cathedral.  Again in 1948 and 1949 the diocese contributed to the complete renovation and decoration of its Cathedral under Bishop George L. Leech. 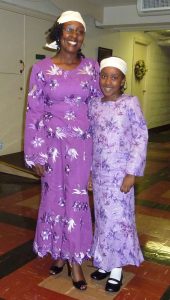 In July 1995 as part of the diocesan Parish Consultations Process, the neighboring parishes of Sacred Heart of Jesus and Saint Lawrence merged with Saint Patrick Cathedral to form the new Cathedral Parish of Saint Patrick. The Saint Lawrence Church building, completed in 1918, now serves as the Cathedral Chapel.  Sacred Heart of Jesus Church building founded in 1901 in the southern section of the city of Harrisburg was put up for sale and sold.

In the summer of 2003 a major exterior renovation project began. This included restoring the fifty stained glass windows located in the main body of the church, re-coppering the dome, cleaning 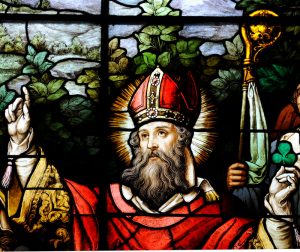 the stonework, replacing the slate roof, and adding new exterior doors for the main entrance.

In 2006 the interior of the Cathedral, was completely restored and renewed, with the tabernacle relocated to the center of the sanctuary, and the entire church was repainted. This was to prepare the Cathedral for its one hundredth anniversary in 2007.

The first parish school opened in 1873 in the old frame structure used by the Sisters of Mercy years before.  When the current cathedral was constructed in 1904-07, the 1827 church structure was dismantled and rebuilt as the church in Burnham.  As soon as the church had been removed, a new brick school was built in 1882.