Catholics of Danville were served by traveling priests, including Saint John Neumann, from 1806 until 1848 when the parish was officially established.

The first mention of Catholics in Danville is found in Father Jean Dihet’s Beginnings of the Catholic Church in the United States that says in 1806 in Danville “there are some Catholics who must be visited by the priests of Conewago going to and returning from Sunbury.”  Apparently no services were provided for the Catholics of Danville until about 1830 when many Irish Catholics came to the area to work on the construction of the canal.  Their pastoral and sacramental needs were attended to by the pastor of Milton.  It is said that a “little chapel” was erected at Danville in these years, probably on land not owned by the church and possession was lost when the laborers moved on.

Bishop Francis P. Kenrick (Philadelphia) noted on a visit in September 1845, that “the town had begun to flourish by reason of the iron works.”  A plot of ground was purchased and, according to a parish history, a small building was erected on the corner of Center and Pine Streets.  In 1845 this building was blessed and used for services.  Soon after, an expansion to the church was needed.  Milton and all of its stations became missions of Danville.  This building served until the present church was constructed in 1868 and dedicated by Bishop Jeremiah F. Shanahan on July 25, 1869.

Of special note, Father Thomas McGovern served as pastor from 1873 to 1888 until he was appointed second Bishop of Harrisburg.

In 1888 the parish received a tract of land in Mahoning Township for a cemetery replacing their small original one on Welsh Hill.  In September of 1890 the old church was converted into a four-room school staffed by the Sisters of Mercy from Harrisburg until 1903.   In 1896 a school was built on the corner of Bloom and Ferry Streets and beginning in 1903, was staffed by the sisters, Servants of the Immaculate Heart of Mary from Scranton, PA.  A new elementary school was built in 1961 and the old school razed in 1963 to provide a playground.

At the time the diocese was formed in 1868, this parish was one of the largest in the diocese.  However, due to labor troubles and economic depression, many people left and the population of the parish decreased significantly. 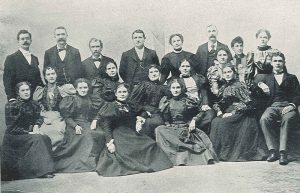 In 1888 the mission church of Saint James in Exchange, fourteen miles north of Danville, was built.  In 1900 a cemetery was established there and a larger church was erected and dedicated in 1909.  .  The mission was cared for from Danville until it closed in 1952.

After much difficulty erecting a building on Bloom Street, Saint Hubert’s Church of Danville was dedicated on June 26, 1864.  Prior to that, German Catholics worshipped or attended Holy Mass in the old Saint Joseph Catholic Church on the corner of Center and Pine Streets.  A new parochial school, added to the rear of the church, was dedicated on February 14, 1906.  The school closed in 1943-44 and the church was dissolved in 1959. 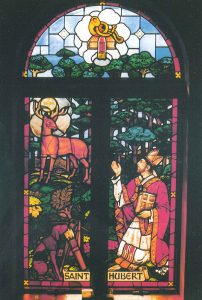